In Conversation with Eric Mourlot – Picasso on Paper | Part I

PART I : A conversation between Eric Mourlot and Aimee Farrell at the Royal Academy of Arts, London – Celebrating the current Picasso on Paper Exhibition, Organised by Alison Acampora. Transcribed and edited by Lianne Pierce (Rhoko) and Eric Mourlot. 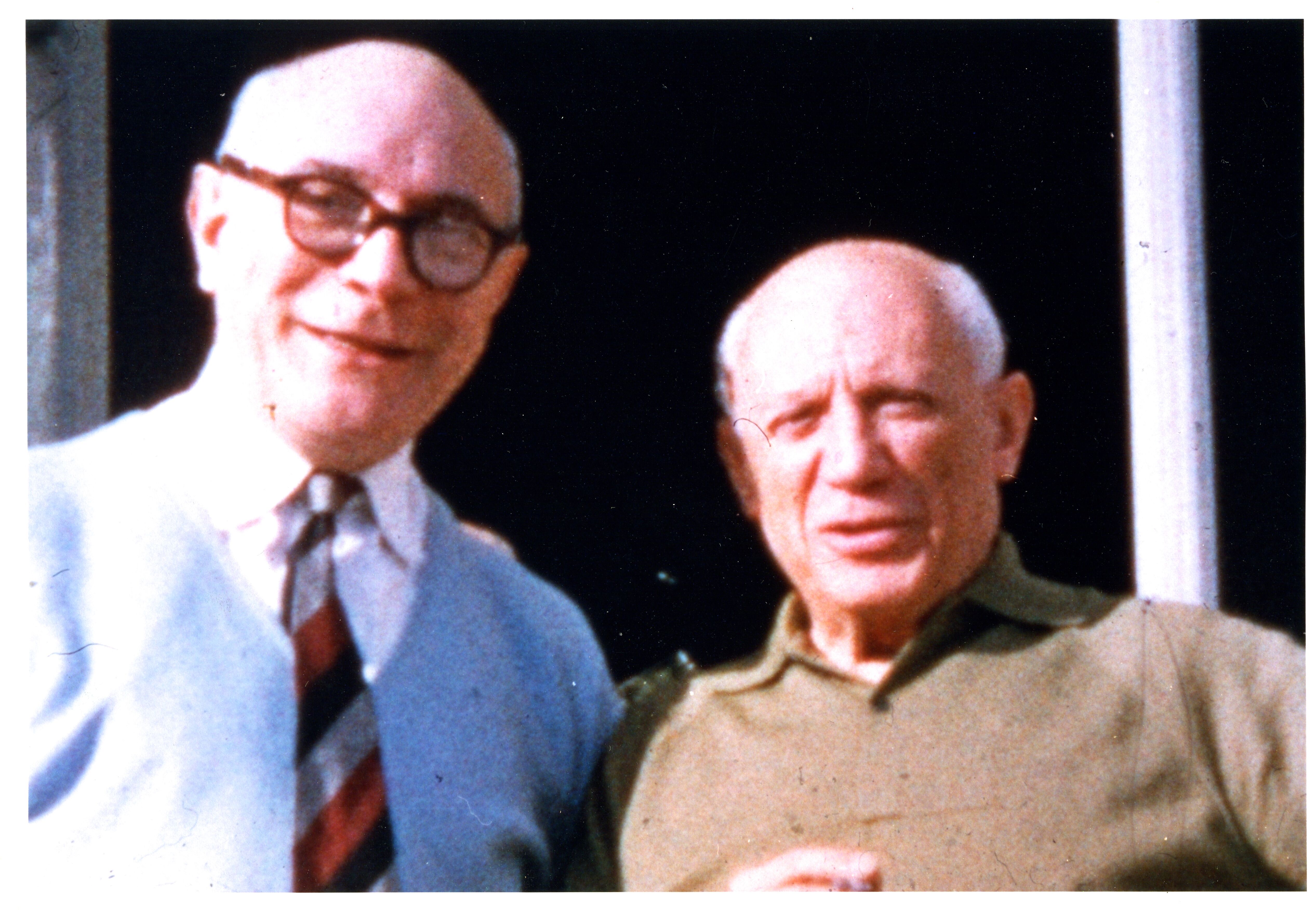 Fernand and Picasso in the South of France at his house in LA, Californie, Cannes, 1960 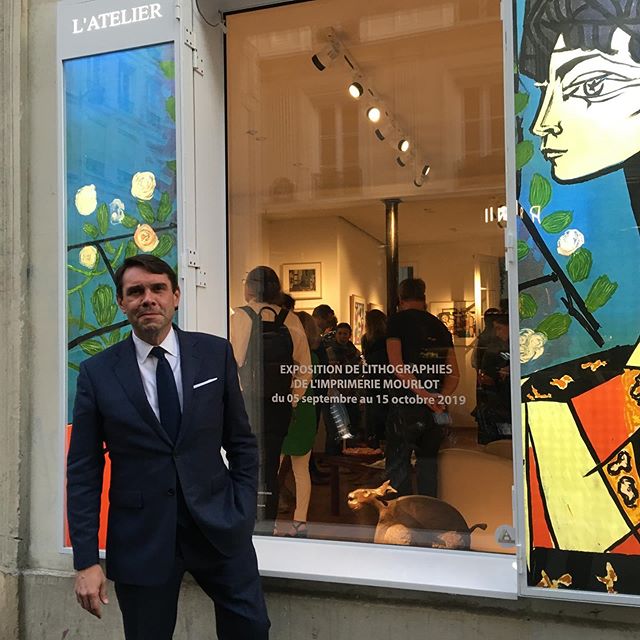 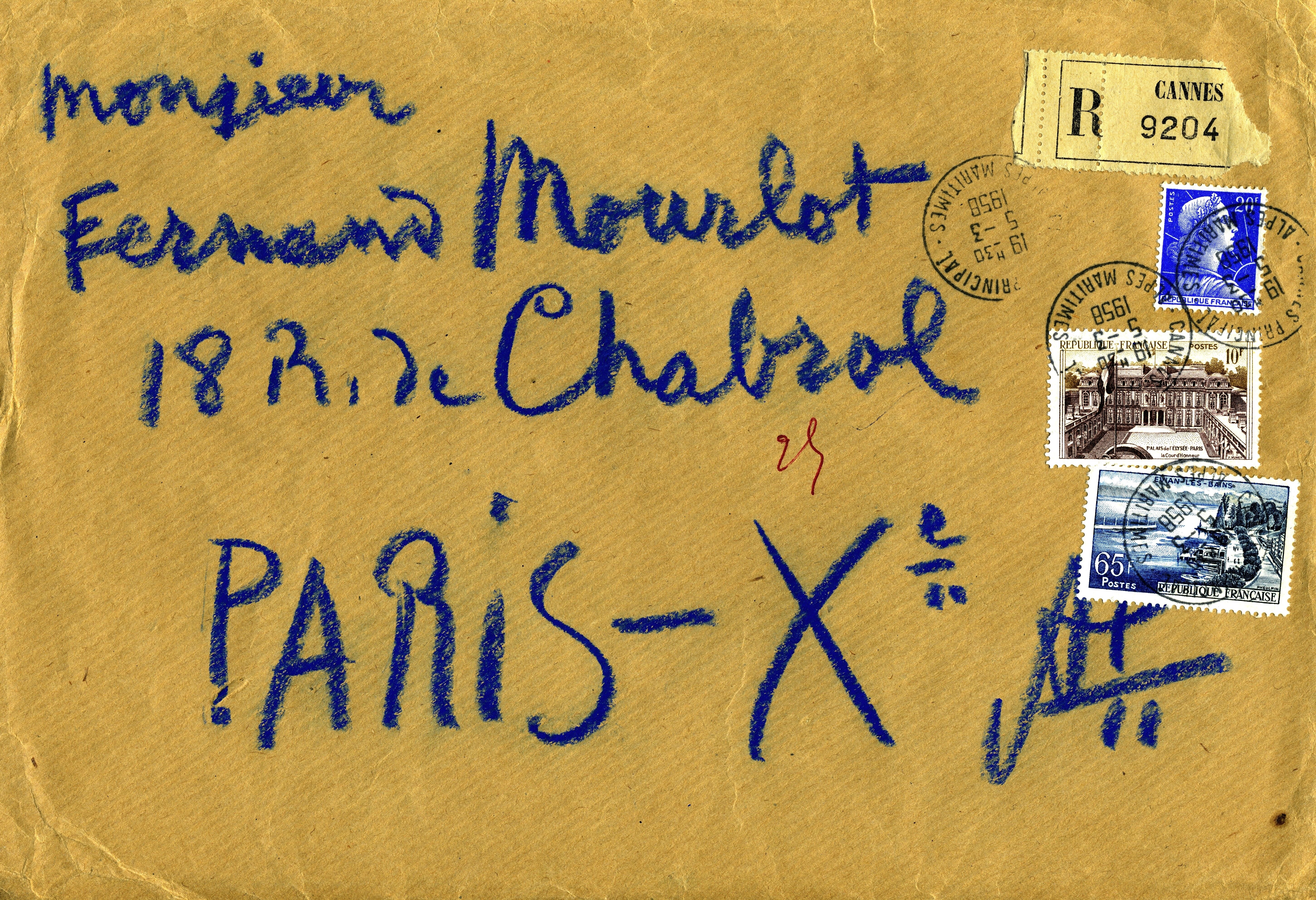 A letter from Picasso to Fernand, 1958 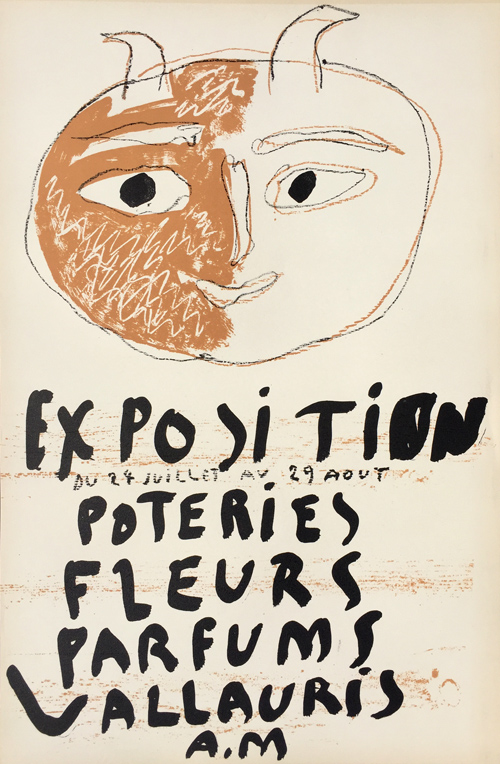 Lithography is actually just another form of fine art printing. You have several printing mediums such as etching, lithography linocut and woodcut. Some of them are pretty simple to explain: you cut into a matrix made of wood or lino – for etching it is copper, or you have lithography in which you draw on a stone.
{Lithos in greek is stone and graphein: to write. Lithography was invented in 1796 by Alois Senefelder as a cheap method of publishing theatrical works.}

What the artist does is take a greasy, oily substance, which is lithographic ink and draws directly onto the stone. It has to be limestone, the best limestones are from Bavaria. We do have some in France, but they’re not as good.

The flat surface of the limestone is smooth and porous. The lithographic ink goes on to the surface and is absorbed partially into the stone. It’s always black ink, it doesn’t have any different colours – that’s not what provides the colour, this is just the basis, which you can also dilute with water. It becomes what we call tusche, (a grease-like liquid used in lithography as a medium receptive to lithographic ink, and in etching and silkscreen as a resist.)
So, this way you can actually use it as a paint brush, as opposed to using it as a crayon. Matisse used it more as a crayon to achieve a very defined, graceful line.
Picasso liked to use all sorts of things. He’d sometimes even use turpentine, gasoline, or wax. He was the “enfant terrible” of printing – to the dismay of our master printers, because afterwards you have to actually print from that stone and it can be very difficult.
That’s part of what makes them so special?
Yes, it is true, there is a finite number of them, a lot of people don’t understand, they say “oh, but, it’s an edition of ten thousand!”  Well, you know, these editions were used as advertising, so they were put on the streets of Paris and in the windows of cafes and shops – then ripped down or just plastered over. So to have them in really perfect condition and available, is simply because there were a few left in the print shop. But even out of ten thousand, you’d be hard-pressed to find a hundred/hundred fifty of them at most. 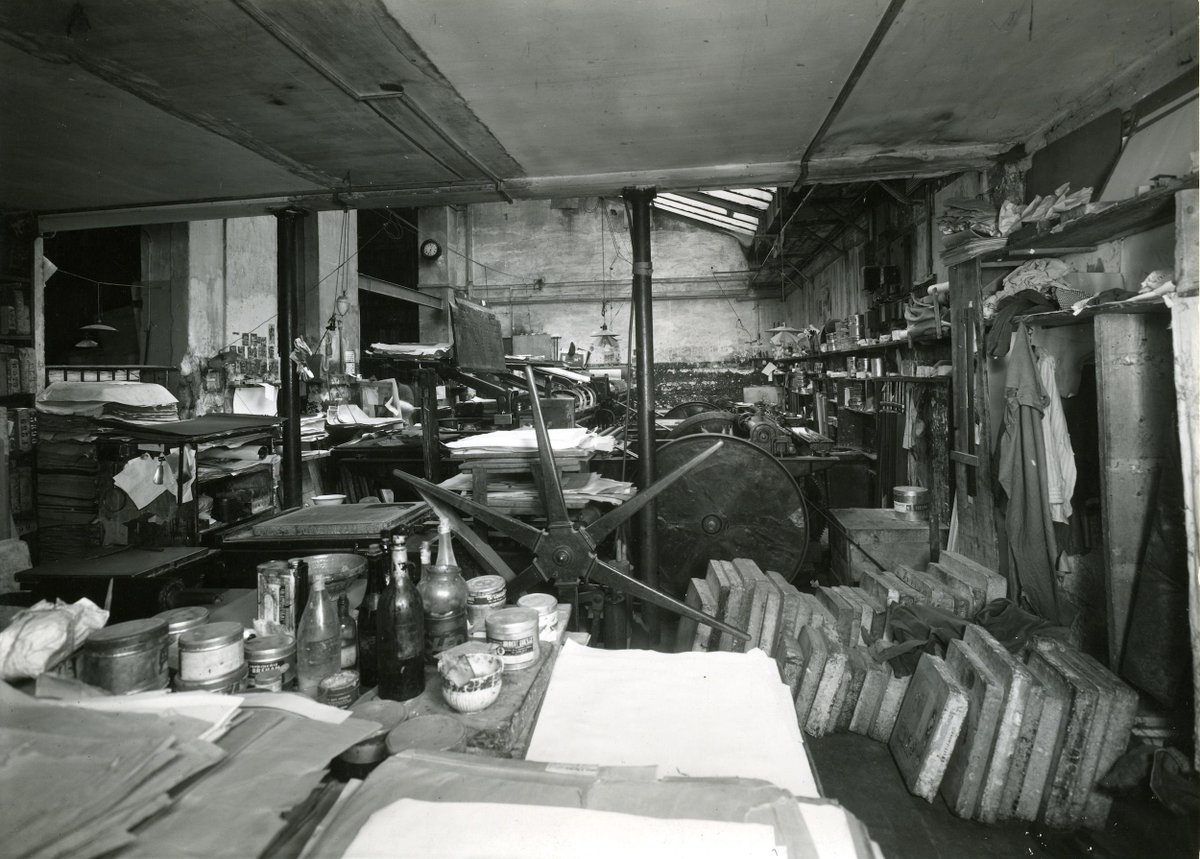 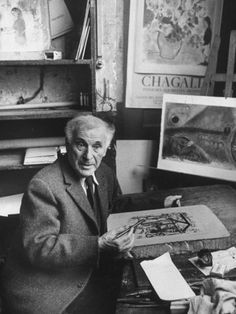 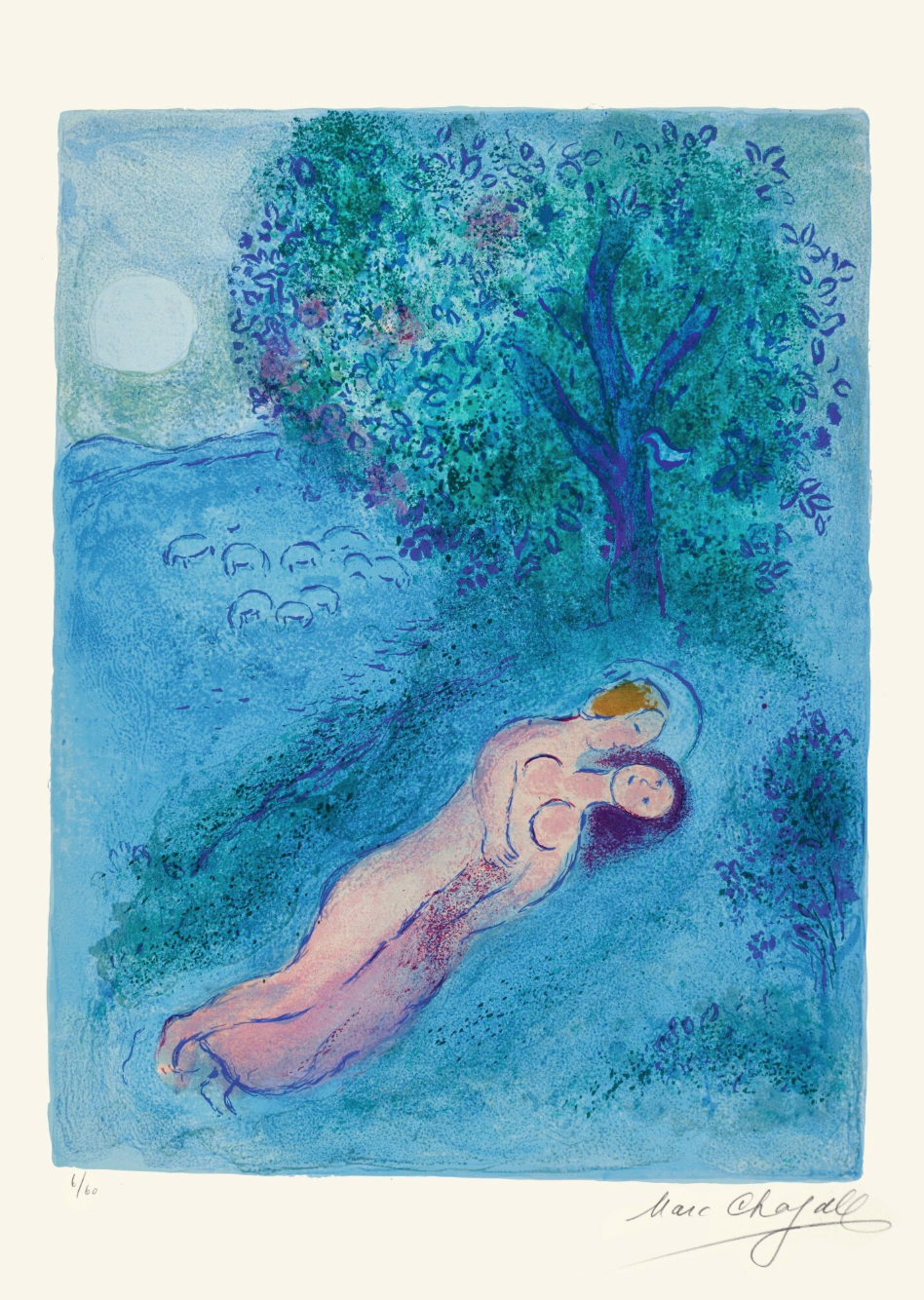 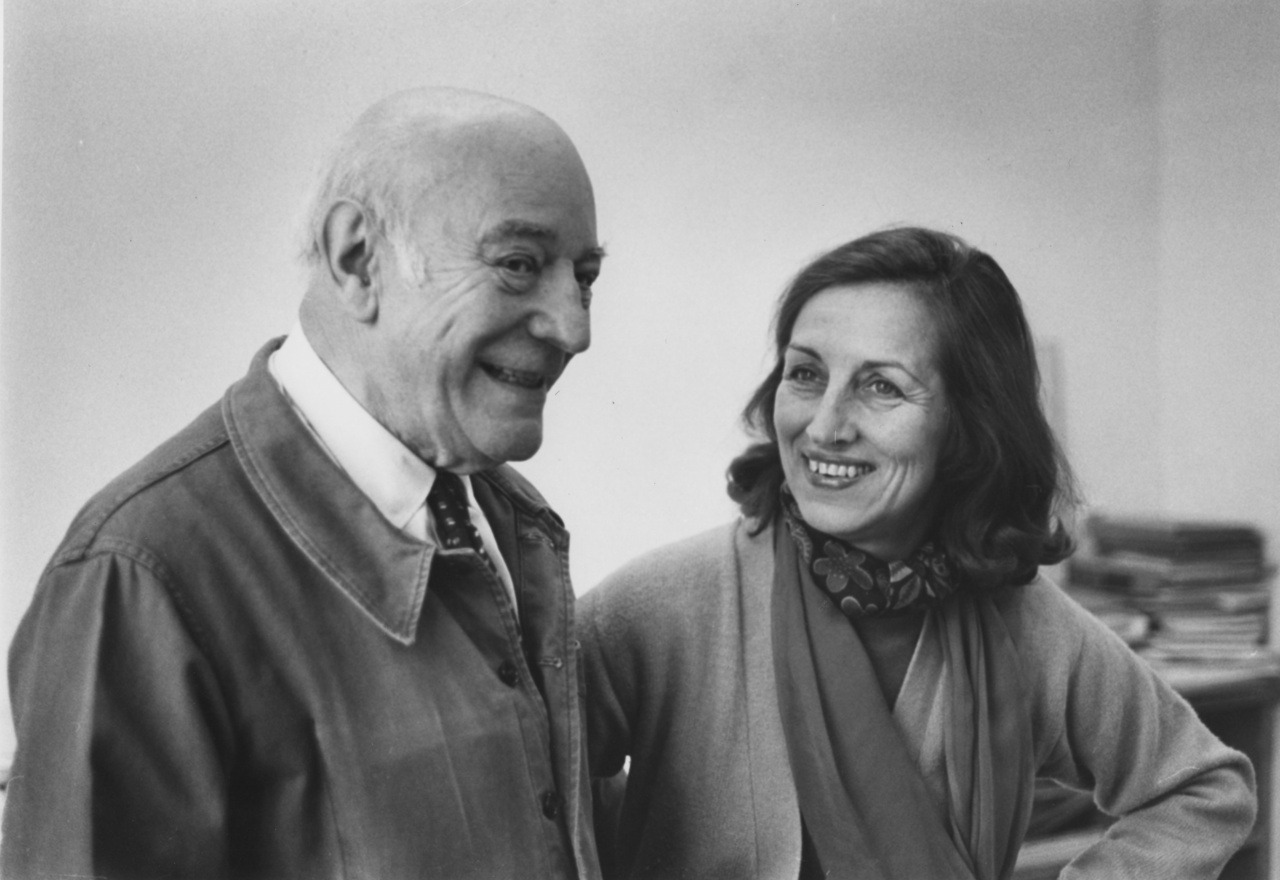 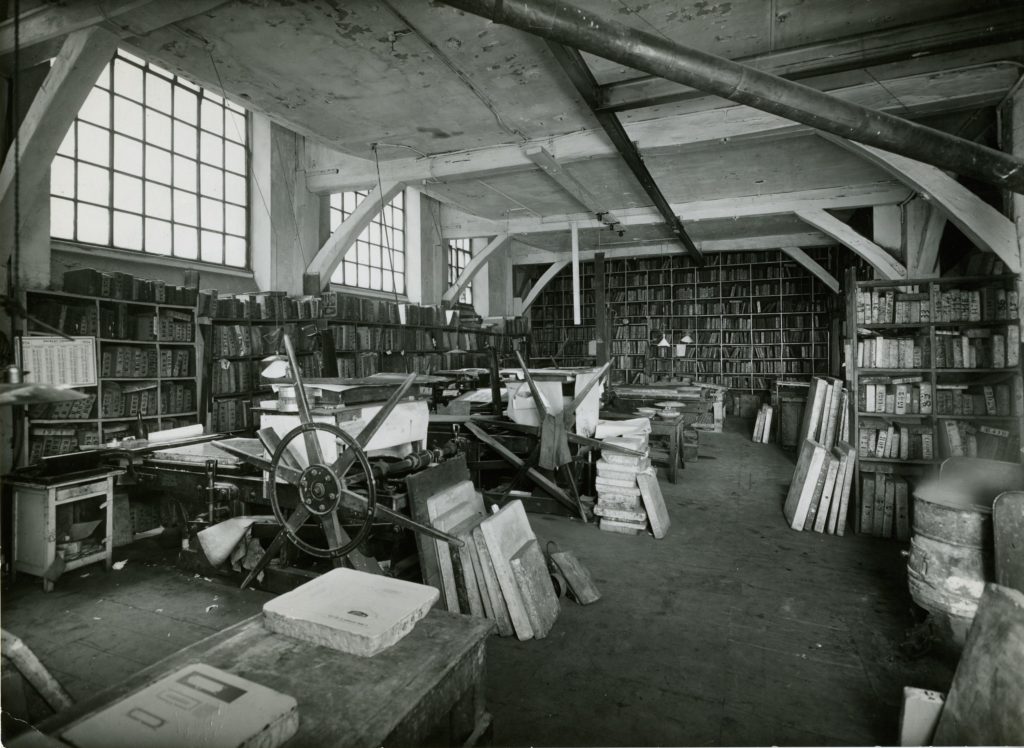 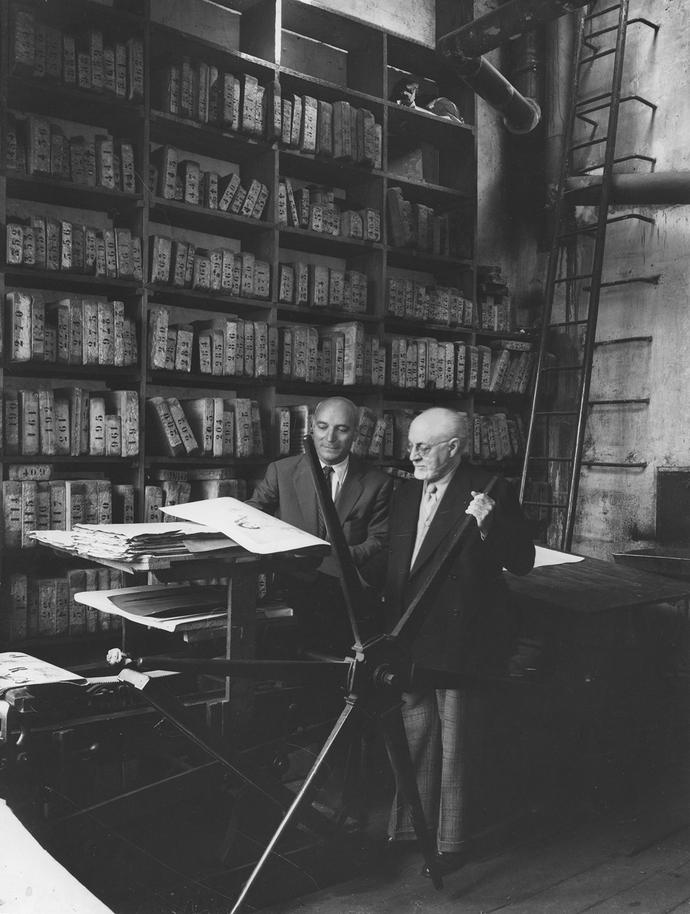 Fernand collaborates with Matisse to create a Lithographic poster for the Art Indépendant exhibition at the Petit Palais, 1937 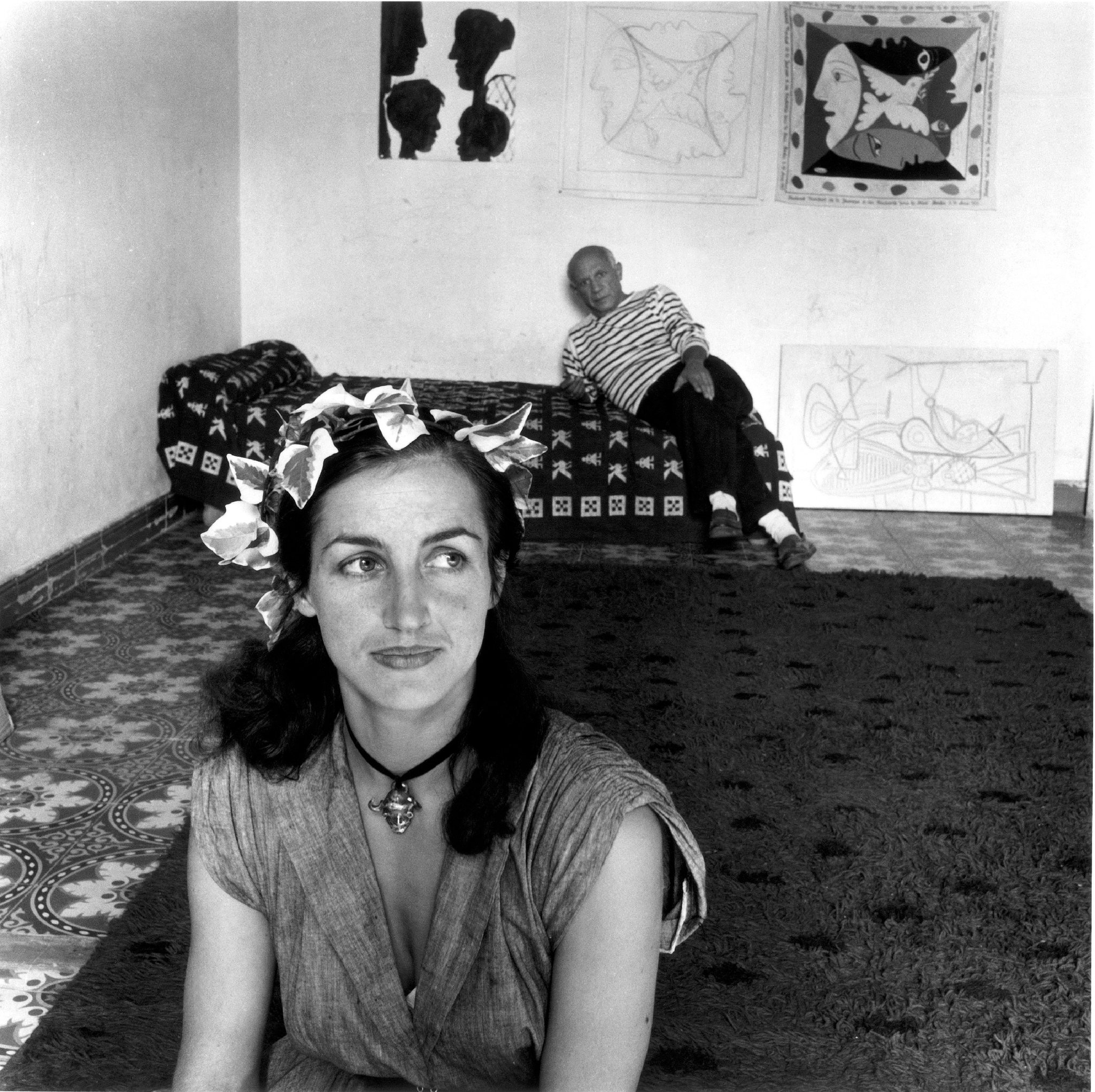 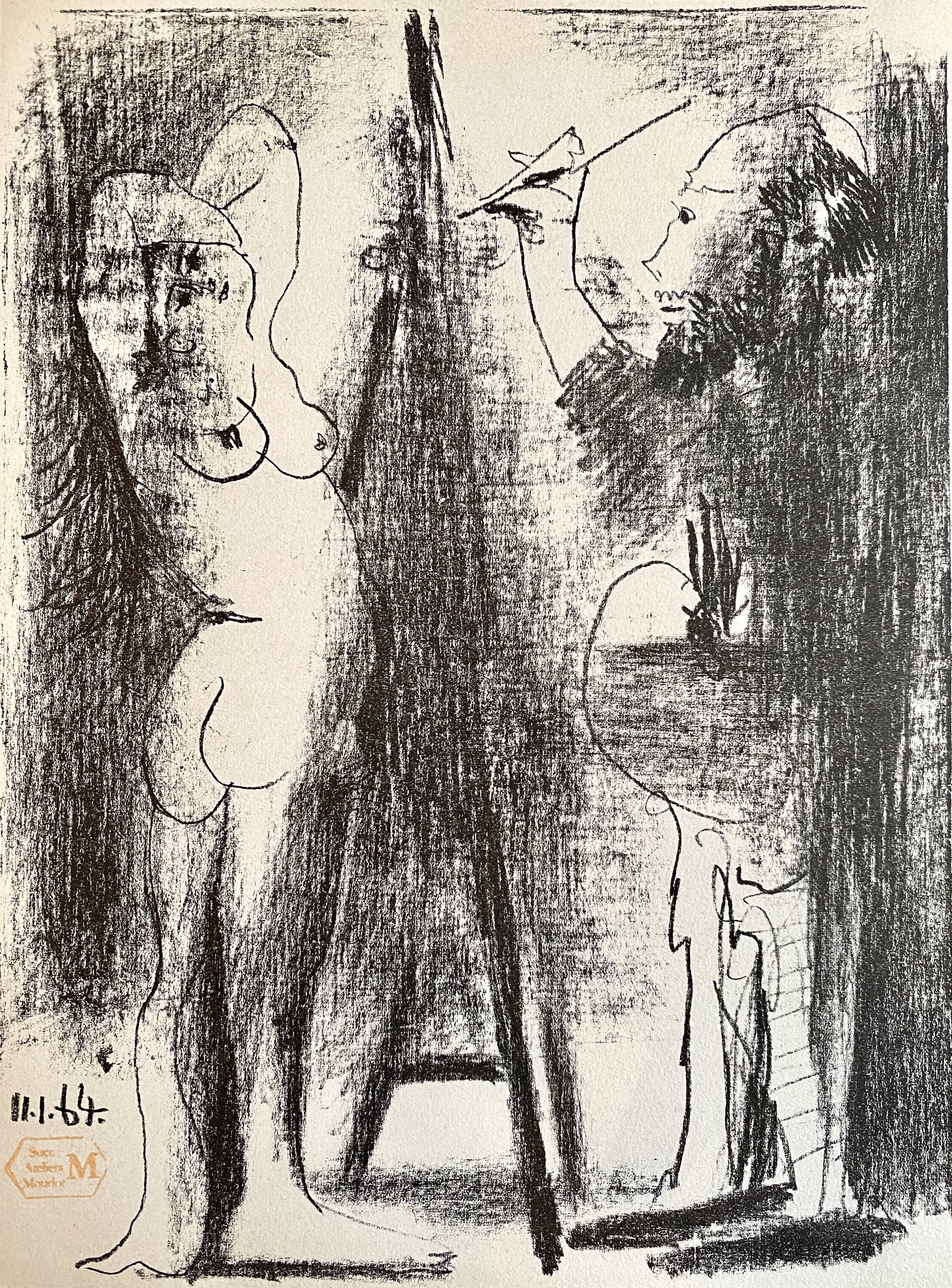 The Artist and his Model II by Pablo Picasso, lithograph 1964

So, some of the works that are out there can be more expensive, due to the amount of work that went into it. The medium is the same, it never changes: it’s lithography – the only
difference is the person that creates the reproduction. If the artist is involved it’s also called an “after” because the artist has to approve everything. Picasso had already worked with us on museum posters, and then in 1945, my grandfather got a phone call from Sabartés: Picasso’s secretary “Mr. Picasso would like to see you.”
They ushered my grandfather into the studio and they were supposed to have a fifteen minute meeting and they ended up having a two and a half hour meeting! It resulted in Picasso telling  my Grandfather “Okay. I’ll be at your studio tomorrow morning at 8 a.m.”
Huh fat chance!! He never woke up before noon!
He did show up the next morning, pretty early around 10/11am walked around, looked at the space and asked if somebody could bring him a stone. My grandfather just called someone right over, but these are not small print shops like they are now, this is a studio where in that location there were a hundred printers. So they put him in a small corner, they gave him some lithographic crayons and he ended up spending the rest of the day there – and that was the beginning of it. That was the corner he was dedicated to – and those, who were there, said he worked during that first time for about four months straight.
And that relationship lasted endlessly?
It says in the catalog that it lasted until ‘69  when in fact it lasted until his death. We even bought a house in the south of France, because it was too expensive to bring the whole family during the summer to stay at the Negresco in Nice while he was working – because after 1958 he really stays in the south of France most of the time. So if you want to keep working with Picasso then you have to bring him the stuff. 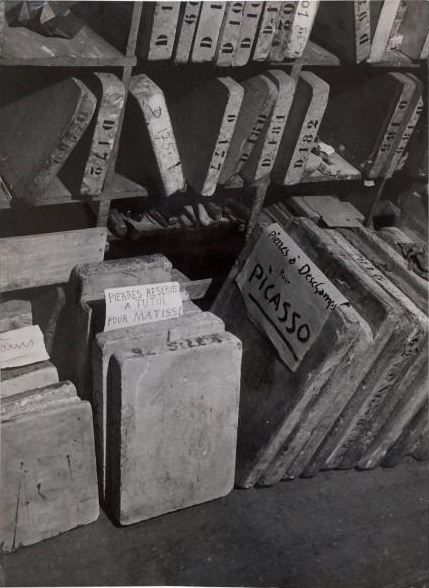 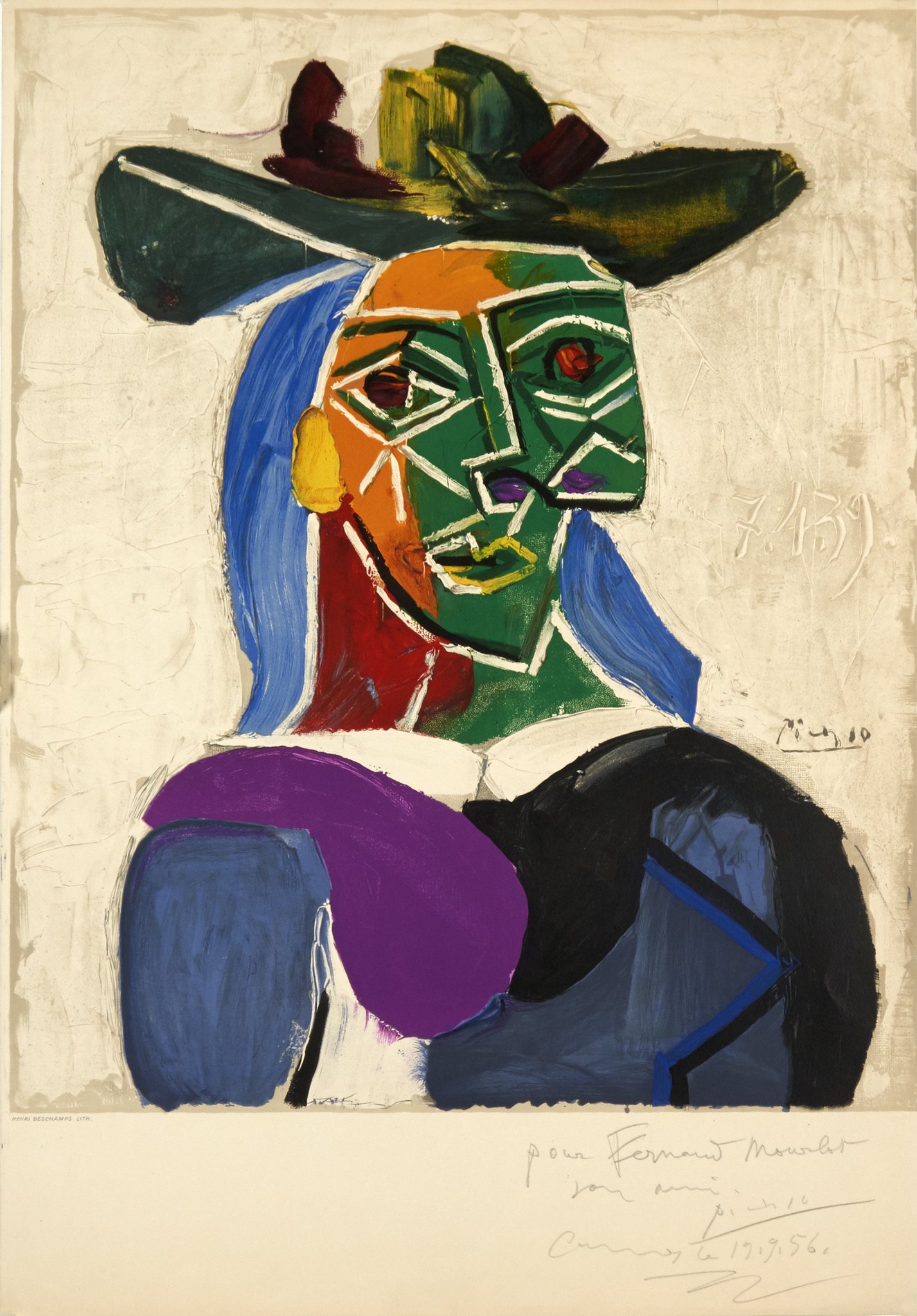 So there’s hundreds of pieces he produced over that time?
Absolutely, just with the lithographs and just with Mourlot it’s about four hundred different editions and with some of those editions, there’s only five because they didn’t work. Gaston Tutin, otherwise known as Le Père Tutin – was one of the master printers and the funny bit is he hated Picasso’s work, absolutely hated it, but he was one of the great masters printers at Atelier Mourlot.

Picasso would bring him these crazy things from home, because sometimes he would borrow a zinc plate – we actually started using zincography. It’s really very similar to a stone only it’s not a two hundred pounds, so it’s a lot easier to carry – it’s probably only about ten or fifteen pounds. Sometimes Picasso would actually borrow these zinc plates and take them, because he could actually work very late – and after a while the employees were like “we need to go home, we have kids, we have a life!!”  So we started bringing them over to his house and we would work in his kitchen.

He would do everything that you’re not supposed to do. He would carve zinc plates as opposed to using this lithographic crayon, or he would do a big wash on it and then use a fork to start carving into everything. He would also work with wax and wax would go all over the place, you can’t really control it. One time Tutin, the master printer, said to Picasso “It’s impossible. I can never do this, it’s ridiculous!” Picasso’s looked at him and said, “Well, I was told you were the best printer in Paris, but I guess I was wrong.”
So Tutin said “give me this” and he went on to the press telling my grandfather “I don’t like this man” and he printed it.
Picasso liked to get the best out of people… but he was nice to them, he would sign a lithograph, and Tutin would take it and stick it at the bottom of a drawer – Picasso was curious as to why he’s got like twenty of the prints signed and never takes them home. My Grandfather said, “Well, that’s because it’s not really his thing.” Picasso asked what should he get him – my grandfather suggested a couple bottles of red wine. So the next time Picasso brought a couple bottles of red wine, to which Tutin professes “Ahh what a God this Picasso is.”  So he never got another signed print, just bottles of wine, which I’m sure his estate is not enjoying as much!
Did Picasso always want to work with the same person (Tutin)?
Yes, because he knew he was with us (Mourlot). He was actually very loyal – but firstly, we were not married to Picasso, that seems to be the worst thing you could do – but working with him was actually easier than working with Matisse.
He was very nice to all the workers. Francoise Gilot: Claude and Paloma’s mother,  who is 98 now, says he was always happiest when he was in the studio because there were all these blue collared guys that he liked to just hang around with. He felt most at ease because they didn’t want anything from him, they didn’t care and he felt like he was one of the guys. They were also there to serve him and to do things for him, so it worked out.
So for Picasso it was just another experiment with a different medium?
Yes, it’s true. It was just another medium like sculpture, painting and ceramics. I think that’s what people don’t understand, very often printing is another form of expression which is on paper. Picasso loved the idea of working on paper. It’s not as solitary as working on paintings in your studio, you work with other people, you work in collaboration. You’ve got writers – if you’re illustrating a book, you are working with craftsmen, then you’re working with all these different things. It’s also interesting to point out that it’s a process where you can actually follow all the different states. When you paint a painting you can never really see where it started, did this start with your pencil? With printing we see every different state, but often we can see the creative process – so it’s a little window into the creative process.

What appeals about the medium of lithography?

What appealed to Picasso at the end of the day: was all these different ideas he was building and he was able to go back and change things. There is one series which is about Clowns where he does a couple of different versions, different colours and doesn’t seem very satisfied – so he asked my grandfather to hang onto the stone for a while. It took about three years until he got to the idea of creating a third one, to change it completely – he tied it all together with the third colour which is the black, so he was able to just change and play with it.

What about your first connection to this world, going into the workshop and seeing these artists at work? Did you see Picasso at work?

Well, almost… and this is what totally qualifies me: I have a picture of me on Picasso’s knee when I’m a year old – so we had a lot of interesting and philosophical conversations! My school was right around the corner from the print shop. I did meet Miró and Chagall, because I was much older and a teenager when they died.

It was just so romantic, the studio looked like you were stepping back into the 19th century –  as I was doing my homework there after school. I would walk home, with my parents and it just really changes you inside. But I went to study political science and became a banker – the black sheep of the family.
I didn’t want to do what everyone else was doing and then eventually I realised it’s my passion. I love it, I love it so much… then eventually we closed the studio in 1999.  The city of Paris has very kindly named a Plaza in Montparnasse after my grandfather.
Eventually I opened a gallery, I just wanted to be involved with it. I would love to be a printer again. I still have a couple of presses and maybe one day I will get back into it. I really enjoy printing – I learnt it as a kid, when I was working in the studio, cleaning the rollers and all these things. It was such a lovely happy place to be. 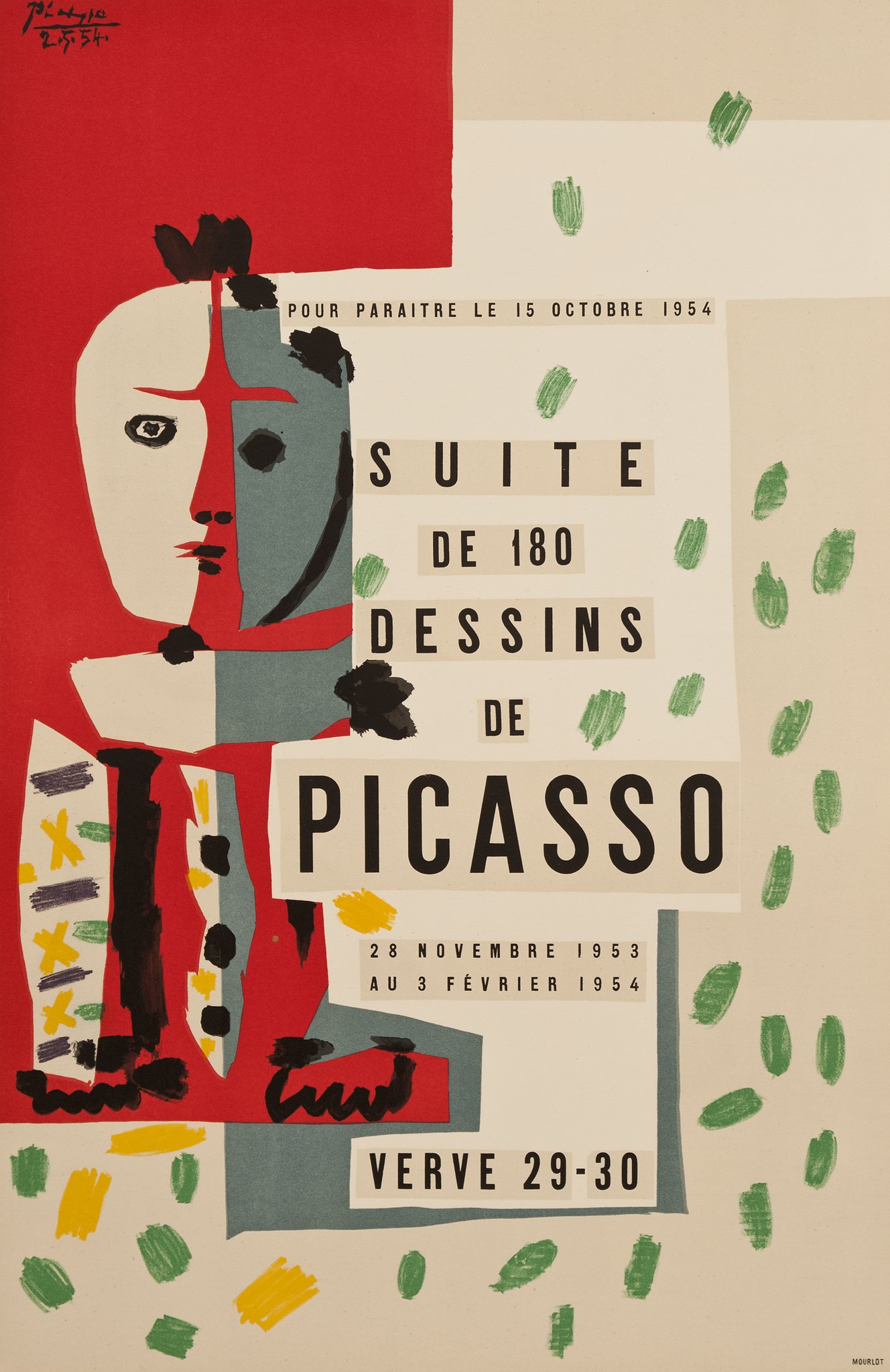 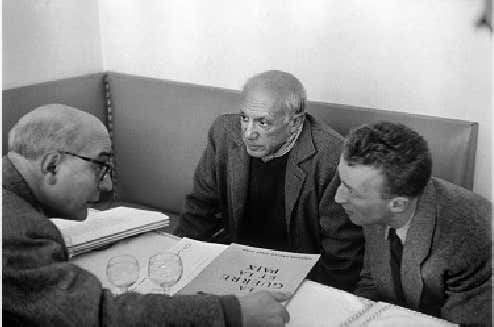 Fernand Mourlot shows the proofs of La Guerre et la Paix lithographs to Picasso and the author of the text in Saint-Jean-Cap-Ferrat, 1954